After the „highlight“ of Pushkar, we were only semi-curious what else our guidebook had to propose as stops on our way to Goa. After several disappointments and misinformations in it, we did no longer want to rely on it, but rather listened to an Indian with whom we were confident that he knows what we are looking for. Daniel, who was a great help in Mumbai, was on a trip to Rajasthan and actually stayed in the city of Udaipur when we were nearby. With also some internet reports claiming it to be a very beautiful place, we gave it a try and went the 100km-detour. Our timing was not perfect, as Daniel left the city again for Mumbai when we just came in.

But indeed, Udaipur is a picturesque Indian city – something we wouldn't have thought exists.
It is situated between several lakes, and the old palace directly on the shore is a very nice masterpiece of the Rajasthan-typical architecture. The touts are not too stressful here, only few cars and bikes drive through old town, and the countless rooftop terraces are nice places to take a break. 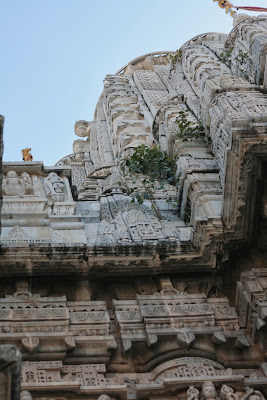 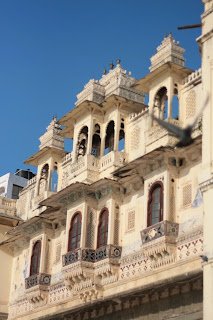 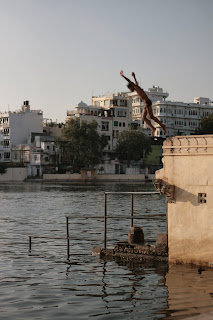 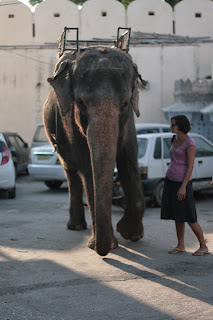 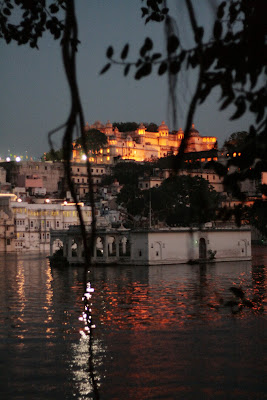 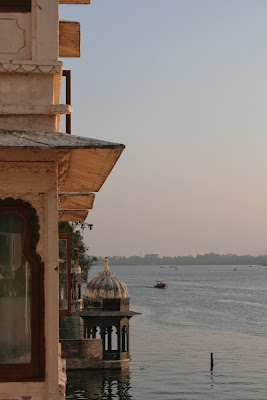 The 007 movie „Octopussy“ was shot nearby in an 19th-century palace, a fact that pushes a whole industry of guest-houses offering evening screenings of the movie – every single evening.
The palace itself („Monsoon Palace“) is situated in a very beautiful surrounding of hills and lakes, and the fact that it is some kind of nature conservatory limits the traffic to only very few cars. 200 Rupees entry fee per car is a lot for Indians, so we enjoyed the 45-minute walk to the top on a mostly quiet road. Up there, the palace was donated from the Maharaja of Udaipur to the Indian people in 1957. It must have been a wonderful place back then, but the fact that all 007 indoor scenes were actually shot somewhere else (30 years ago) made sense to us: the palace was completely run-down, with electricity cables running all across, countless radio antennas placed on top, and awfully dirty hallways and staircases. Clearly, the Indian system of corruption and neglect ruined this once-beautiful place. The remains of what was once a nature museum were on the ground level, and if not for the view and the quiet walk, the visit of the Palace would really be a waste of time. 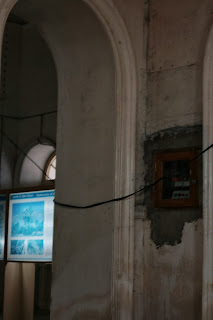 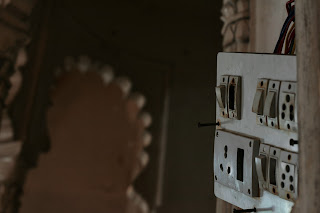 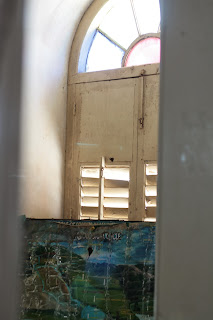 As overnight stops might turn out stressful in a small VW Bus (the first time on the trip that we really envied the overlander truck drivers a bit, with their spacious shelters loaded on the back), we planned ahead. Governmental-run hotels turned out to be a great spot for us at touristic places: they take campers without much discussion and for small money (around 4€ per night), offer toilets and mostly showers, and are mostly situated in former colonial or military grounds - so they tend to have decent green yards, huge parking spots, and the countless staff does not work on commission to an extent that private hotels do (at least it seemed to us). We stayed at the Rajasthan tourism development cooperation hotel in Udaipur, and another one of these state-run facilities is in Mandu, an old muslim temple area in Madhya Pradesh.
The ruins there are 500 years old, and the whole area is nowadays used more for agriculture than for tourism. So, it was a very quiet stay, we arrived at noon and could easily wander around without any hassle. We were almost the only Western tourists, so no surprise we had to stand in crowds of Indians again for souvenir photos. After a quiet night (we had spent some nights in the middle of Udaipur or on highway Dhabas), we went on to got south - with about 650km to go to Agonda Beach. 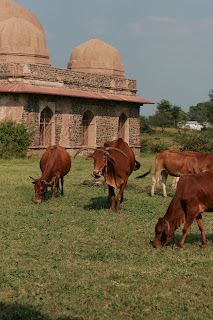 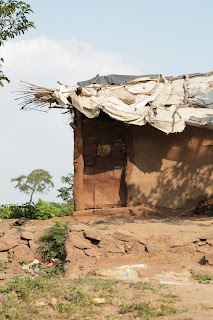 It took us another two days, before we finally reached a true highlight of our trip: Agonda Beach in Goa. Where once a 5-star-luxury resort was planned, the local fishermen revolted against it, and the little village stayed a treasure for many years. Tourism is getting bigger and bigger here, too, and the nearby Palolem is already very similar to the resort-filled, all-inclusive beaches of North Goa. But, Agonda is still a gem, so you can park your car on the beach (with the black ruins of the hotel in the background) and enjoy an easy life.
Every morning, fishermen come by and offer you their fresh catch, tail-wagging dogs defend your car against overly-curious monkeys, and fireflys guide you to the beach at night, where you are surrounded by green-glimmering fluorescent plankton. 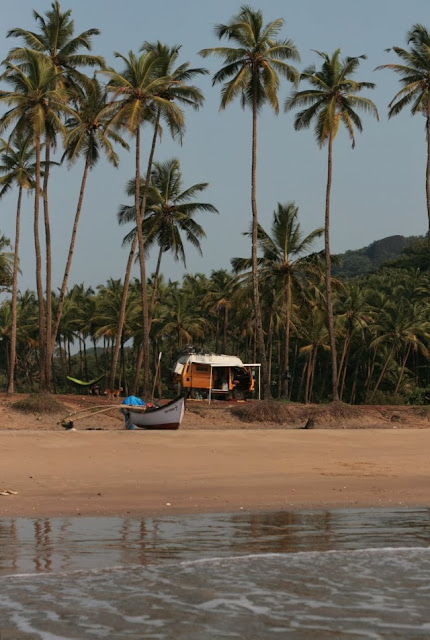 We don't think it will be hard to spend the final days of our trip here, before we drive Kalimero back to Mumbai, from where he will head west again, in an big iron box.